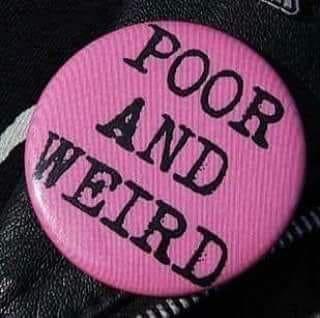 Truth be told Venus Grrrls would stop me in my tracks for any given 20 seconds if I were walking past a radio without a frame of reference and this track were playing. This is exactly the post Sonic Youth, Smashing Pumpkins, Bikini Kill hybrid mix I want to hear most of the time. It’s what I looked for in Dream Wife, Hey Charlie (they could have been massive) INHEAVEN (so could they), Goat Girl, Deap Valley and Fluffy (does anyone remember Fluffy?) and in Venus Grrrls I have found what I’m looking for in abundance.

Well stone me if they didn’t play this one right. Taking a leaf out of AC/DC’s playbook, Goth Girl the single was Teased with a 20 second clip on YouTube and linked on Various Socials in the days before the track dropped proper. That’s how it came to my attention. Halfway 2 Nowhere beat me to the punch. I read that post and went down a digital rabbit hole. I’ve been sitting with my pre-save clock ticking down waiting to hear the whole thing ever since. Nice work Adam.

There is and earlier EP. It’s called Wicked Things and you can hear the whole thing on YouTube. Just follow the link below. Three tracks of attitude loaded full on Girl Punk that bears comparison to Grace the singer being a young Grace Slick alike on opener No Signs. Grace the Synth player being a 4AD style new wave moooood machine on Amy (I understand there’s a lot of Graces’ in the paragraph to just throw in an AMY like that) and for the glorious Fuzz of You’re Alright, I Guess to allow Jess, Gabby & Hannah to kick out a pearler of a tune. You’re Alright, I Guess got it’s own video (posted below the new track) and you can get a feel for how they shape up live by watching the live session video for Wicked Things below that) Same three tracks but live in a gorgeous living room (or something) with some killer outfits and a chance to see the band really slay in real time.

Goth Girl itself is a step towards the big time. An undeniable ear worm hook. After a whispered intro and slow build moodyness you get big old bass, drums and hook worm guitars and layers of pouting eyelined synth. Grace and the band sound more assured. They know they’ve got a potential hit single on their hands. Not that they’ve sold out. This is more like a vision crystallized. The productions louder. Crisper, Stronger. The simplicity of the hook met with the strength of the band is a step up. There’s a proper guitar solo, break downs and a palpable sense of longing. I can genuinely see this going over ground huge. The Teaser and the clip that come on the Stream would have us believe there is a full on promo video in the post. For now though. We have the audio track.

I want an album. I’m impatient now and am as excited by Venus Grrrls as I am Spiritbox, Posable Action Figures and Cleopatrick. There’s some ruddy good music around and as soon as we can start going to gigs again these girls are going to own the scene.