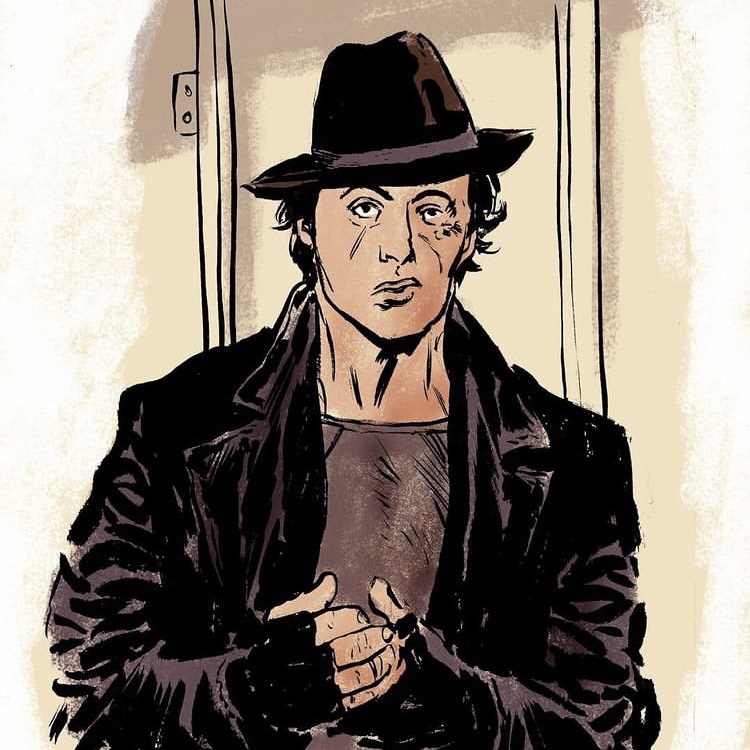 What could be more eighties than Sylvester Stallone? New Coke? Reaganomics? Tiffany? Not even close. Which films got rented the most from our local video store, watched on repeat and emulated on the playground of my school? “Adrian!” It was all about Arnie or Sly in my school. You had to pick a side. I went with Stallone because while Rambo, Cobra and Tango (or was it Cash?) didn’t do a lot for me I did like Rocky. A lot.

The Rocky Theme Music may not have got it’s children’s choir whistles and bells until Rocky II and it may well have actually still been technically from the 70’s but I have to say every kid at my school loved that trumpet parp. The song was a hit single for movie music man Bill Conti for the first time in 1977. Bill has previous and post success with hit scores from Karate Kid to TV mega hit Dynasty and some Bond Franchise action with the score from For Your Eyes Only.

So we’re on the second day of 80’s Action movies and I’m already breaking the rules (loose as they were to begin with) by posting a Sports Drama from the 70’s. And (here it comes) yet… Movies are just like music in that Instant Time Machine Evocation Ability (from here on out never referred to again as the ITMEA). Stallone, Arhnolt and (checks notes) Bruce Willis (?) ruled the 80’s and decided to sell Hamburgers to Tourists as the decade ended in a Hard Rock Cafe format for people who want to drink $5 shakes while sat under props from Howard The Duck (and who doesn’t right?)

Stallone was a big movie star for sure. The biggest among kids. Back in those early Rocky days he was just as famous as a writer and director as he was a leading man. He’d go on to write several Rocky sequels, the Saturday Night Fever sequel Stayin’ Alive, F.I.S.T, Rhinestone, all the Rambo’s etc etc. For me Rocky is his character writ large on screen. The simple poetic lunk with big dreams and a one track mind. As with most of Sly’s tent-pole character franchises the quality dipped with each new iteration until you’re in the territory of Robot Butlers and disco remixes of this here banger by installments III and IV. In a parallel cinematic universe John Rambo from First Blood started life as the celluloid equivalent of Born In The USA (all misunderstood and horrified) and evolved into a feature length Trump rally unwittingly playing the song over it’s PA oblivious to the original lyrics.

We can’t talk about Rocky music without giving eternal credit to Survivor and their 80’s action movie theme to end all 80’s action movie theme’s Eye Of The Tiger. So large is that songs power on the western worlds subconscious we only have to hear it playing in a shopping malls PA or on an oldies radio station to imagine the mundane task we are carrying out is part of an epic training montage. What is Rocky without those montages? What is Stallone or the action genre? So ubiquitous is boxing and training and Rocky and Bill Conti’s horns that I knew an underdog wannabe boxer where my old band used to rehearse (The Terry Marsh Center, a sports hall named after the only local sportsman of note… A Boxer) who was nicknamed Montage by his journeyman trainer because of his total lack of winners talent but dogged persistence to keep training.

Now I’m on record as not being a Sports person, but I do love a good boxing movie. From The Champ to Raging Bull to Cinderella Man, The Fighter, Million Dollar Baby, Ali, The Hurricane, Southpaw, that number in Bugsy Malone and even Real Steel (Real Deal all of the time) I’m Queensbury Rules as long as nobody is really getting hurt.

The most recent event I can recall that featured that trumpet herald couldn’t have been further from The Streets Of Philadelphia (don’t worry I’m not going to try and slip Springsteen’s theme for a Tom Hanks weepie from the 90’s in as an 80’s Action Movie Theme as well). I was at a horse show with Mrs ForTheDeaf (she’s the equestrian, I was there for the beer) and somebody was doing dressage in the arena. As a Lady in top hat and tailcoat was pirouetting about on a dainty horse for points and applause to Rocky’s Theme I couldn’t help but think “Bill Conti must be so proud”. What’s amazing is the reach of Gonna Fly Now and it’s 30 words of pigeon English lyrics that barely register before the 1:06 moment when the guitars do THAT THING is in us all now. People who have never seen the film get the reference. And you know what? When it pops up in Creed or Balboa or a parody skit I feel a little like I’m about to go running up and down the school field arms aloft like I just ‘did’ something.