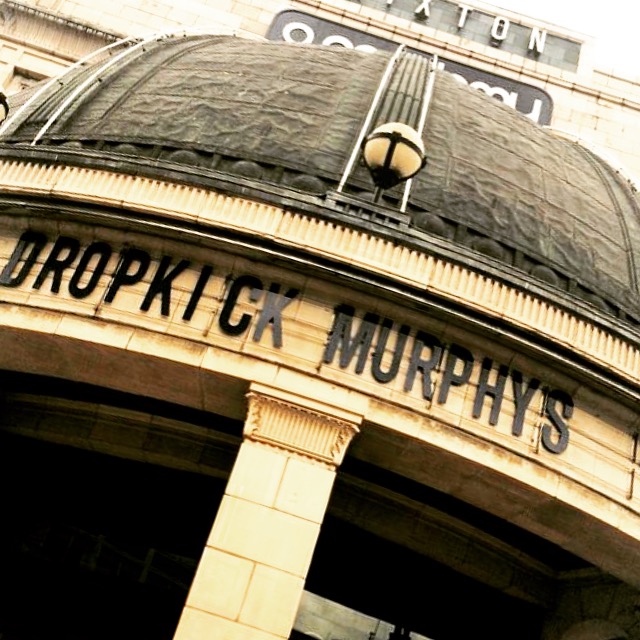 The drum sound on Sing Loud Sing Proud is something to behold. They sound how BIG rock show drums sound in your head. DUNDUNDUMDUNDUNDUMDUNDUNDUM! It’s not exactly original but damn sure is it effective.

Then the guitar chugs in. Simple one chord riff. But again it’s not the originality it’s the primal precision that is striking.

Bravura in the vocal. It’s chest beating machismo in delivery and subject ‘Well I just got back from a breaking a fight, I was weighing in heavy but feeling alright’ so far so Cock Rock. Then the next line changes perspective on you ‘All I hear in the distance, Mines and shells, the guns and sirens wailing, another attack repelled’

So not just a song about being a big tough Alpha Male. It’s news from the front. The Dropkick Murphy’s are no strangers to songs about the combat life. From The Green Fields Of France to The Gang’s All Here they’ve proven their credentials as a kind of hard drinking veteran friendly house band for ex-Irish or Ex-Military or Ex-Society type Punks.

‘Do you think, we’re gonna make it? You don’t know unless we try’. The songs not waving it’s dick around anymore. It’s a call to action. A clarion call to the afraid and the unsure to stand up for themselves and do what must be done.

There’s a switch in vocalist. Another voice makes the defiance now sound like a groundswell. Two voices urging you on. This is a movement. You’re not alone with doubt, you’re in a gang, with back up.

‘Do you think we’re gonna make it? I don’t know unless we try. You could sit here scared to move or we could take them by surprise’ – We’ve all had those mates. The ones who always want to get us into some shit. At the time you curse the fact that they’re your oppos. ‘Why am I backing up this lunatic?’ But looking back. That’s where a lot of your best stories come from.

That’s what Dropkick Murphy’s present. Not a Beery Mob out making other people feel threatened. A Beery Mob out encouraging people to not feel alone.

‘Stand up and fight and I’ll stand up with you, we shall succeed’